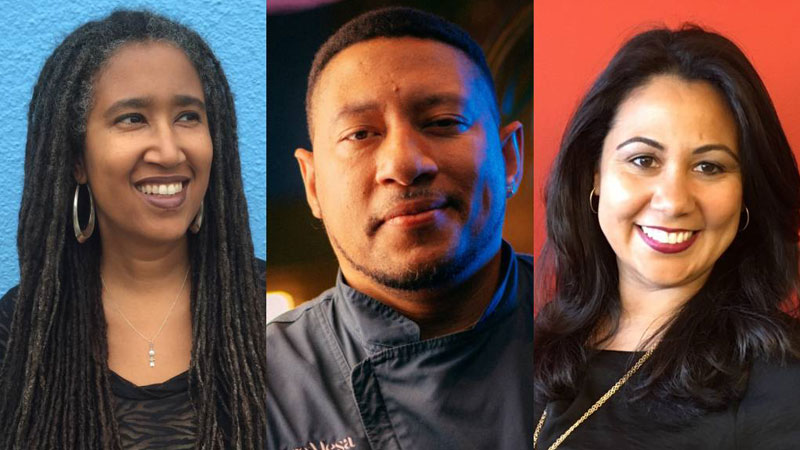 Nelson German, the chef and owner of alaMar, a seafood restaurant in Oakland, remembers the day a Black family asked a staffer about the Black owner they had heard about.

Nelson German, the chef and owner of alaMar, a seafood restaurant in Oakland, remembers the day a Black family asked a staffer about the Black owner they had heard about.

Hearing about that interaction was a turning point for German. As a Black Dominican American, German, 41, realized he hadn’t done enough to educate those around him about his Blackness and the importance of it.

“We are Black. We are part of the African diaspora. We just speak Spanish,” German said. “The African continent influenced the world. We should embrace that, and really give tribute to it now, because there’s a lot of people who had to shed their blood and sacrifice their lives for us to be in this position. We should show them some respect.”

“So, I always say Afro Latino,” he said.

German finds himself fielding numerous requests during Black History Month for interviews, cooking demos and lectures to talk about his African roots. The same thing now happens during Hispanic Heritage Month, a trend he welcomes.

Many Latinos who identify as Black or of African descent have felt sidelined in broader discussions of race and ethnicity. In recent years, advocates and scholars have called for the experience of Black Latinos to be given greater consideration during Black History Month.

On Feb. 1, the Latino Community Foundation, which funds Latino-led organizations and encourages greater political participation among Latinos in California, announced in a tweet: “There is no American history without Black history! We proudly celebrate #BlackHistoryMonth & honor Afro-Latinx leaders.” Numerous other Latino-centered organizations posted similar messages.

“The contributions of Afro Latinos to this country and Black history go hand in hand,” said Jacqueline Garcel, CEO of the foundation, who identifies as Afro Latina. “That might offend some people, and that’s OK. But, let’s have the conversation about why?”

The history of Afro Latinos is not taught in American schools, and the idea that someone can be Black and Latino still feels novel to some people, according to Tanya K. Hernández, a professor at Fordham University School of Law.

Latin America is home to the largest Black population outside of Africa. Many people there are descendants of the more than 10 million Africans who were imprisoned and transported like freight to the Americas during the transatlantic slave trade.

African American and Afro Latinos share key historical similarities, such as being enslaved, living through colonialism and enduring centuries of racism. Those experiences and that history deserve recognition during both Hispanic Heritage Month and Black History Month, Hernandez said.

“There is now a growing space to express Afro Latino identity with greater attention being paid to issues of Black Lives Matter and intersectionality,” said Hernandez, whose forthcoming book, “Racial Innocence: Unmasking Latino Anti-Black Bias and the Struggle for Equality,” examines discrimination against Black people by non-Black Latinos, and how that promotes white supremacy.

“It’s not so much the case of, ‘Oh, some people have just discovered that they’re Afro Latino,’ or maybe that could be the case,” she continued. “What you’re seeing more of is the greater receptivity to identities that have already been in place.”

In the 2020 U.S. Census, about 2.4 million people identified as “Black and Hispanic” or “Black Hispanic,” accounting for about 5% of the nation’s 46.8 million people who identify as Black. Mark Hugo Lopez, director of race and ethnicity research at the nonpartisan Pew Research Center, said that is likely an undercount.

Some Afro Latinos might not select Black as their race or instead choose multiracial, Lopez explained. In 2020, the number of Latinos who selected multiracial ballooned from 3 million to 20.3 million, or nearly a third of the country’s roughly 65 million Latinos.

“There’s a number of things that have happened over the last 20 years which have begun to change the way we talk about race and the labels we use to describe ourselves,” Lopez said. “People are more aware of and are seeking to understand better who and where they’re from. And that’s true of Latinos, too.”

Aya de Leon, a novelist who runs the Poetry for the People program at UC Berkeley, was born in Los Angeles and raised in Northern California in the 1970s and ’80s. While growing up, she remembers, people were divided into four main race categories: white; Black; Chinese, for anyone of Asian descent; and Mexican for anyone from south of the U.S. border.

That left little room for her to explain or even fully grasp her own background. Her Puerto Rican mother presented as white, and her father was a Black man with Caribbean ancestry. She didn’t fit perceptions of what people thought a Latino or Black person should be.

It wasn’t until she left California for Boston to attend Harvard College that she encountered a significant Afro Latino population.

“When I was a kid and could pronounce things in Spanish, Latino folks, particularly Mexican American folks, were sort of shocked,” de Leon said. “Being in the Northeast, I was like, ‘Oh, wow, look at this — these are Black people speaking Spanish to each other, and nobody’s, like, taking their picture. It’s not like an unusual thing.’”

Still, the idea of who could be Black in America seemed exclusionary to de Leon.

“When I grew up, there was this sense that Blackness, with a capital B, was the kind of culture that came out of the U.S. South from African folks who had gone through a slavery experience,” she said. “There was no room to be a different kind of Black.”

German, the chef in Oakland, was born and raised in Washington Heights, a predominantly Dominican neighborhood in New York City. His parents, grandparents and extended family members insisted they were “Dominicanos” or “Latinos,” and avoided terms that acknowledged their Blackness and African descent.

Early in his career, he gravitated toward Italian, Spanish and French cuisine because he thought cooking the Dominican food he grew up eating would prevent him from attaining prestige or success. The restaurant industry, he said, tends to marginalize food from Latin America as greasy, cheap and lacking sophistication.

German, who moved to Oakland with his wife in 2010, slowly began adding Dominican dishes to alaMar’s menu. He subsequently opened SobreMesa, an Afro Latino restaurant in downtown Oakland in 2020, the same year he also showcased his Dominican cuisine as a contestant on Bravo’s “Top Chef.”

About five years ago, when German began researching his African ancestry, he learned that his roots traced back to Cameroon in West Africa. He then made the connection that one of the core ingredients of his cooking — plantains — were brought to the Americas from West Africa, along with enslaved people.

“When I heard that, I started bawling tears. It was eye-opening,” said German, who will share his culinary journey at a KQED Live event on Feb. 22. “We need to dive into our roots and really respect that.”

When he thinks about how some Latinos try to erase their Blackness, he says he doesn’t blame people from older generations for thinking that way.

“It’s up to us now to educate and keep having these conversations and letting people know the truth about who we are,” he said.

Garcel, of the Latino Community Foundation, is another Dominican American Bay Area transplant from Washington Heights. Growing up, she noticed that her mother, who was light-skinned, was often treated differently from her darker-skinned father. When they first arrived in New York, she remembers, her mother went to apartment viewings alone to avoid discrimination from landlords.

Like German, Garcel also has gone through a process of embracing her Blackness in spite of the anti-Blackness and preference for European features that pervade many Latinx communities. She was often advised to straighten her curly hair “to fit in better.”

Garcel saw how her father found more acceptance and support from Black people in Harlem than from white people, and even some other Latinos. And throughout her own career in public health and nonprofits, Black women have been some of her greatest champions and mentors, Garcel said.

After moving to the West Coast, Garcel said she continued having to deal with people questioning her background, but in new ways.

“Because Dominicans are so small in numbers outside of New York City, people don’t understand who we are or where we come from,” she said. “I’ve been told, ‘You head up a Latino organization in California, but you’re not Mexican?’ I’ve been told that to my face.”

For her part, de Leon, the novelist, spent years reflecting on her identity and learning how to overcome pervasive racist, anti-Black attitudes. She is heartened that younger people tend to be much more aware of the nuances of race and identity. 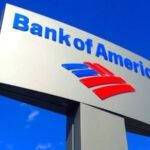 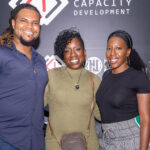