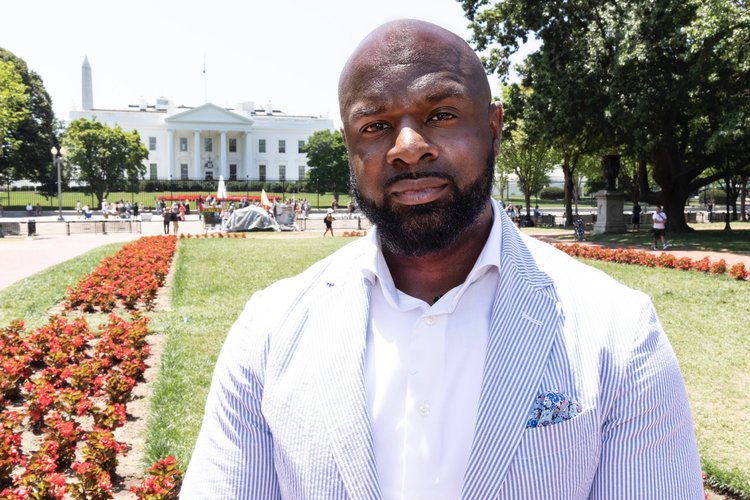 When K. Bain founded his anti-violence and racial justice organization in Queens over a decade ago, he knew it would expand beyond the World’s Borough, and then beyond the corners of New York City.

He was proven right last month, when Community Capacity Development – a nonprofit that aims to “uproot systemic challenges facing marginalized communities of color” through violence interruption, youth outreach, entrepreneurial programming, community building and other programming – was tapped to join a violence intervention group led by the White House.

“This was my big, hairy, audacious goal back in starting [Community Capacity Development],” Bain recently told the Eagle. “When you have a goal like that, it has to happen that the federal government gets involved.”

“I had all of this written on paper,” he added.

When the White House called, seeking out Bain’s expertise, he said he wasn’t surprised.

“I wasn’t like, ‘Wow, the president is calling and saying he wants to have a conversation with us,’” Bain said. “I was saying, ‘Yep, this is right about on time.’”

Community Capacity Development, which has its headquarters in Downtown Jamaica, a program in the Queensbridge Houses and, most recently, a location in Woodside, recently joined the national Community Violence Intervention Collaborative. The program, launched by President Joe Biden’s administration in June 2021, aims to create a peer-to-peer learning network centered on community-based public safety strategies.

CCD is now one of five programs from across the country tasked with leading the program, providing training and technical assistance in helping communities take stock of their current public safety programming, and improve and expand it to help reduce gun violence.

The collaborative, which has been boosted by a $300 million investment using American Rescue Plan funds, also includes a number of mayors and law enforcement officials, and 64 community-based violence intervention programs.

Bain founded CCD in 2010, when he was working in then-Councilmember Jumaane Williams’ office.

The now-public advocate was looking to secure funding to start a cure violence pilot, with the intention of bringing the programming citywide.

“Back then, it was a citywide thought process – how do we unite the City of New York?” Bain said.

The organization first began its work in Jamaica. It’s work centered around violence interruption – sending credible messengers into neighborhoods to defuse conflicts as they happen.

Bain was also at the center of the 2017 founding of the city’s Crisis Management System, which sends credible messengers into neighborhoods with disproportionately high rates of gun violence and connects residents with city services.

The CMS was expanded in an additional 20 police precincts in 2020, and was featured in Mayor Eric Adams’ Blueprint to End Gun Violence. Adams has frequently praised the work of the violence interrupters, saying in June that “the uniqueness of the CMS is that they can say they’re not a part of the city [government].”

In February, Adams invited Biden to visit New York City to discuss gun violence. Joined by a number of other elected officials from New York, Biden made a trip to One Police Plaza. Later in the day, the mayor took the president to Long Island City’s P.S. 111, where Community Capacity Development had opened an outpost.

“It’s about intervention and prevention, and prevention are the long term things we need to do,” Adams said in February. “I asked him to go on the ground with us to meet the crisis management teams, the everyday people who are doing the hard work in alignment with the police department.”

It was the first time Bain had met Biden, and was the start of CCD’s federal partnership.

At the center of CCD’s work is “human justice,” Bain says. He operates under the belief that violence in the Black and brown communities CCD serves is caused by poverty, poor education and, more broadly, systemic racism.

“Essentially, we are an anti-poverty, anti-racism and anti-violence organization,” Bain said.

Since being named to the Community Violence Intervention Collaborative, Bain and his partners have begun making monthly trips to the nation’s capital to meet with the group. In addition to Biden, Vice President Kamala Harris and Director of the Domestic Policy Council of the United States Susan Rice sit in on the meetings.

“It feels good to be not only included in the conversation, but asked to lead and be innovative in a lot of what’s happening on a federal level,” Bain said. “It’s an exciting time.” 4 deaths due to heat exposure reported in NYC